not the smoothest landing, but still lots of good data. SN10 get ready

A valiant attempt, SN9! Looks like it overshot the rotation back to vertical, then was out of altitude in which to potentially correct back. SN8 stabilized slightly short of vertical in its approach, from what I could see, so I'll be interested to learn what went wrong this time

Ok here is my best guess. I haven't had a chance to see anything more official from Musk, this is just my opinion from what I saw and what I was thinking about during my shift at work.

From the footage we can see that only one raptor relit, so without that second engine to help steady out that flip maneuver, I think that is what made it flip too far over, not to mention not slow down nearly enough. Now saying that, SN9 was already fully assembled before the SN8 launch, and that launch gave SpaceX so much data that they scrapped or disassembled SN12, SN13, and SN14. So SN9 may have failed because it was not fully rebuilt and still had the first gen design flaws.

So why launch if its probably going to fail?

Partly its because they had it already to go, but also they where testing pressurizing the header tanks they need for that flip with an inert gas, I think with helium, so that they wouldn't lose header tank pressure like with SN8. So SpaceX will probably know whether that worked, and something else failed, or if that solution didn't work at all. SN10 and SN11 were also further along the production schedule before the SN8 launch as well so we could see both of those face plant just as hard while SpaceX changes what they can on those vehicles without a full rebuild. They might as well get as much of the good data out of those vehicles even if they just crater. It does seems wasteful, but SN15 already has a could of significant design changes form the SN8 data, so by the time they collect the data from SN9, SN10 and Sn11, that should mean that SN15, SN16, and SN17 will be significantly more successful.

This is that hard work that NASA and Boeing or Lockheed Martin are not capable of doing anymore. This launch is why SpaceX will ultimately be successful, if the government can just stay out of the way for a couple of minutes.

I think you're onto something. I noticed but barely thought about the fact that SN9 had only one engine firing during the landing attempt. SN8 had two burning (one of them flickering out near the end with green flashes that John Carmack said is the signature of a copper combustion chamber "eating itself"). So maybe it was at least partly a matter of not having sufficient thrust (and the stability of a pair of pivoting thrust sources vs. just one) to correct the overshoot past vertical once it happened. That said, a gentler approach to vertical could have avoided the overshoot, I would think, so I wonder if control software or the feedback loop of sensors that controls it could have been partly at fault. Or maybe the software is built on a certain degree of reliance that the engines will ignite and start providing thrust when relight is attempted, and is limited (both logically and physically, with only one gimbaled rocket motor firing) in its ability to cope with failure of one engine to relight. I'm very curious about what actually happened and am looking forward to SpaceX's findings. You make a very reasonable point about going ahead anyway with the SN9 launch, even if known flaws in that generation of the design made successful landing a longshot. One perspective says "why waste a rocket", but on the other hand they already put the resources into building it and scrapping it would be a loss too. The launch was worth it if they can learn from the results. I look forward to seeing what comes next.

Like I mentioned, SpaceX was testing an inert gas to maintain pressure in the header tank to correct the issue the that destroyed SN8, but the second engine not lighting this time may have been a separate unrelated and unknown issue. Without that second engine that maneuver has to be executed differently, but by the time you know the second engine isn't going to light, its too late to make that decision, even for the computer. Also the Raptors have sensors that will cancel a relight if an issue is found so we don't know for sure yet, but Musk usually says what happened, they don't treat there failures like government secrets. That is part of why they are different and succeeding. Blue Origin is treating everything going on in that company, like its a government agency, so not many public tests, and certainly nothing from behind the curtain on the New Glenn rocket. Its why I doubt they will every achieve anything meaningful.

Yes, I wonder if their tank pressure fix was successful and the failure to relight had some separate cause this time around. You're right about Musks' transparency; I'm sure he'll share what they've learned once they've had sufficient time to investigate and reach a confident conclusion. It's a shame that Blue Origin's efforts lack both transparency and a big enough vision. I'm sure Elon would be happy to have some worthy competition for SpaceX's efforts, just as with potential Tesla rivals. Advancing the state of the art and getting humanity to the next frontier is clearly his primary goal. I lamented for a while that the guy with the bigger budget (Bezos) lacked the vision to apply it the way Musk is doing, but now that Musk's fortune has caught an updraft I'll no longer be losing sleep over it. As Bill pointed out the other day, at the rate they're crashing these things we'll be on Mars soon 🙂

I don't have anything technical to add to this discussion, but I wanted to say thanks for posting the topic and keeping it up to date.

If NASA/FAA revert to obstructionism, I wouldn't be at all surprised to see that Musk already has a backup plan for a launch site out of their jurisdiction.  Perhaps in another country, or perhaps he's bought an equatorial island somewhere.

And then there's the South Texas launch facility, being built from scratch.

Was going to ask some questions about Starlink, but I think I'll start a new thread so that it doesn't clutter up this one.

Thats part of my working theory on the oil drilling platforms SpaceX bought, he could just move them out into international waters and launch from there, biggest middle finger to the FAA ever. Its has to be one of the considerations SpaceX made in buying them. Currently there stated purpose is for launching out at sea, because of the incredible noise of a Starship launch, not to mention local life disruptions around ground launch sites.

here is this weeks production diagram from 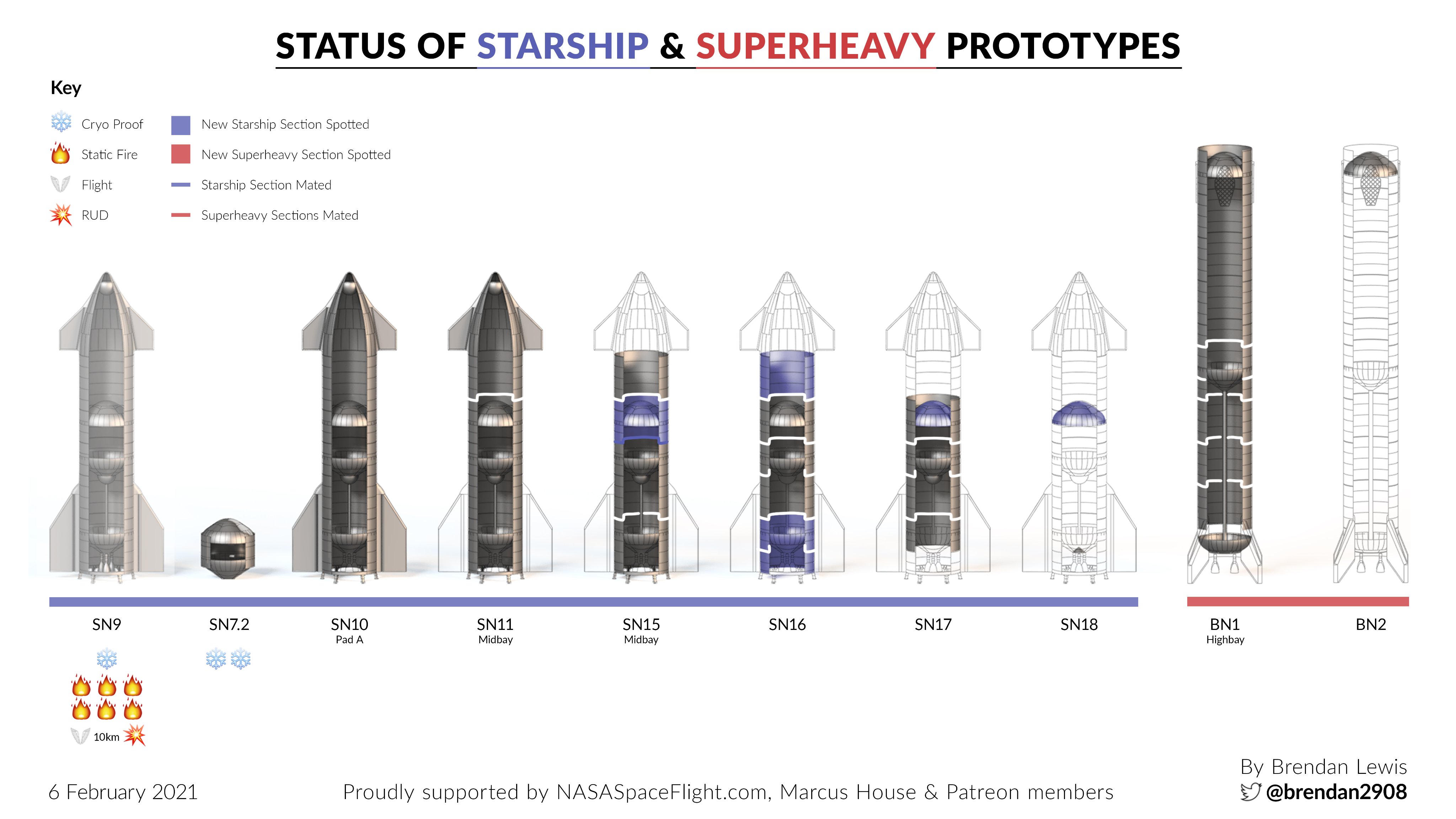 Also happy 3 year anniversary of the Falcon Heavy test launch, here is the video that the Right Angle guys did, one of my favorites from Bill, Scott, and Steve. 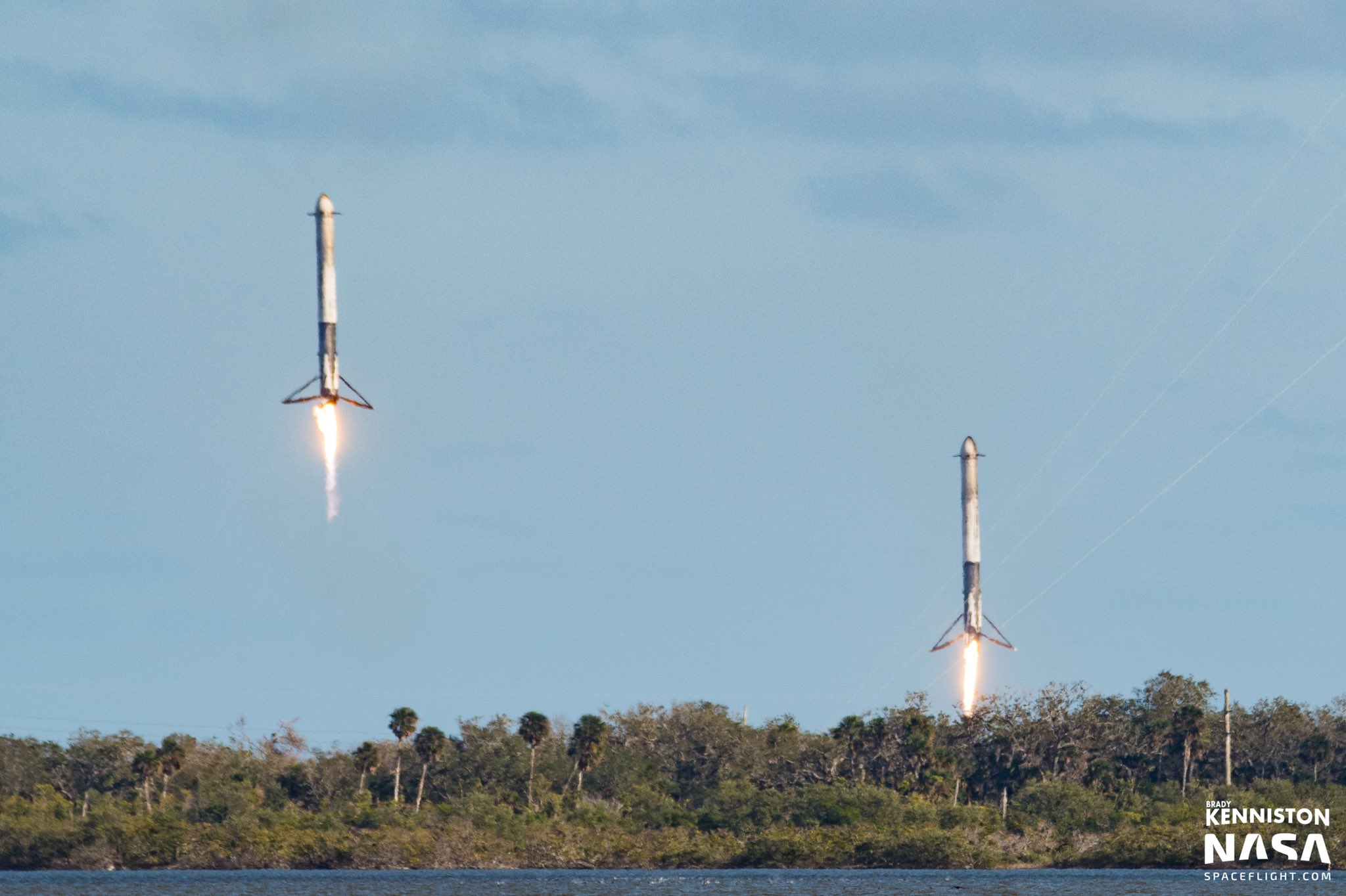 Thats part of my working theory on the oil drilling platforms SpaceX bought, he could just move them out into international waters and launch from there, biggest middle finger to the FAA ever. Its has to be one of the considerations SpaceX made in buying them. Currently there stated purpose is for launching out at sea, because of the incredible noise of a Starship launch, not to mention local life disruptions around ground launch sites.

Oh, wow, I just thought they were for landing, to replace Of Course I Still Love You.   But I suppose that launches should be possible too.  At first glance it would seem that the forces would be too great, but that's really just an engineering problem, isn't it?

But of course, of course!  And I hope he names the first launch platform something like, Buh-Bye, FAA! 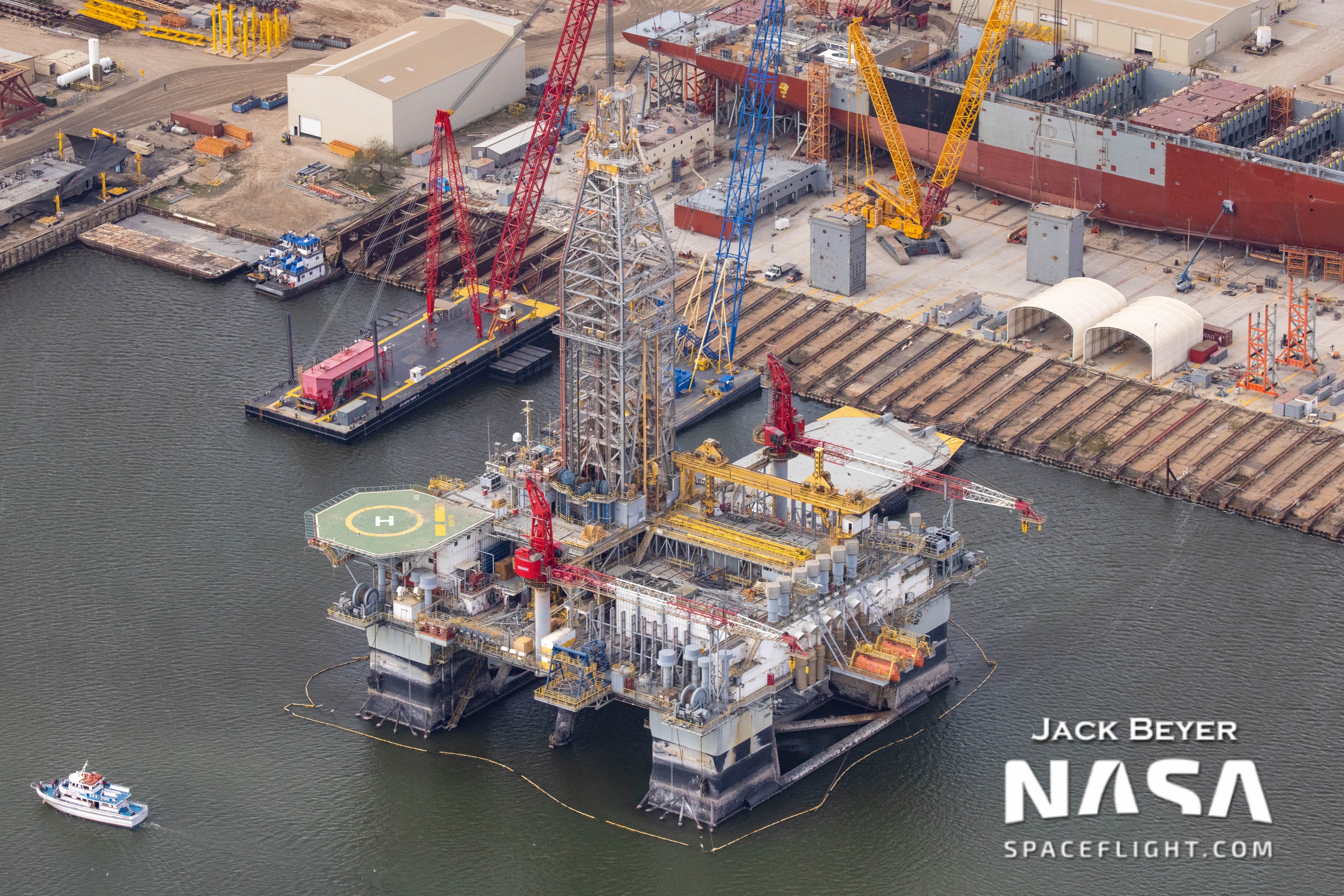 SpaceX has bought them for the expressed purpose of launching and landing of the starship and super heavy booster, I am just saying that they may have the side benefit of also being able to bypass the FAA by launching independently from any country's territorial jurisdiction. After all its not like the Chinese ask the FAA if they can launch.

Any cookies that may not be particularly necessary for the website to function and is used specifically to collect user personal data via analytics, ads, other embedded contents are termed as non-necessary cookies. It is mandatory to procure user consent prior to running these cookies on your website.